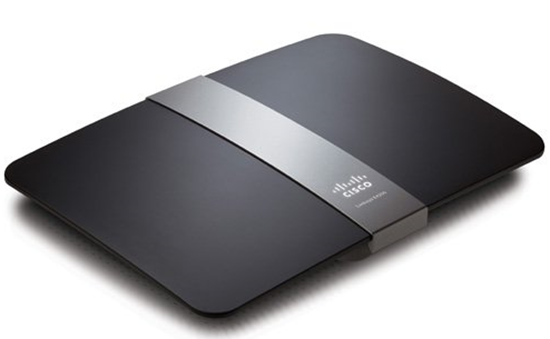 Cisco, or Linksys I guess, has been honking their horn about their latest E4200 Router, which looks very un-router like.  In fact it looks so cool we wondered how it actually worked.  So we bought one and put it through paces to see if it is worth $109.99.  Read on for a quick review of the Cisco Linksys E4200 Router. 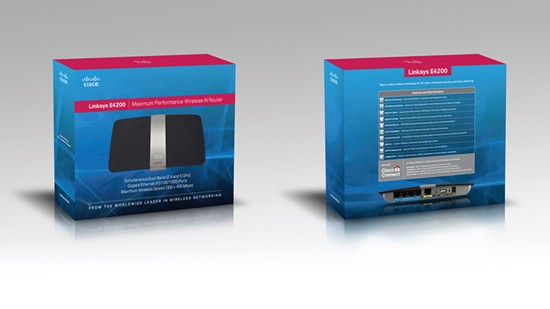 The Cisco Linksys E4200 Maximum Performance Wireless-N Router is the newest Cisco router in the E-series.  The router sports simultaneous dual-band and has a whopping six internal antennas; three each for 5GHz and 2.4GHz frequencies.  In theory the E4200 should be able to have throughput levels at 450 Mbps, good luck with that.  The only way you will see throughput at 450 Mbps is in a perfect test environment with matched components.  In fact, users are claiming the older E3000 has been faster in real world environments.

Our favorite part about the E4200 router is the design.  It is simply beautiful, and looks nothing like a router.  The majority of the case is matte black with a strip of silver on top with the famous Cisco logo embossed.  The logo glows in a pleasing blue color when the router has a web connection.  While the router was on the test bench we constantly had people asking what it was.  The only hint that it is a router is if you look at the back.  See the picture below.

On the back of the router are the usual router bits, four Gigabit Ethernet ports, the WAN/Internet port, reset button, USB port (for FAT32, NTFS, and HSF+ storage devices), power cable plug-in, and a Wi-Fi Protected Setup button.

The E4200 has the familiar and easy to use Cisco Connect software, perfect for my Mom, it is that easy to use.  After you agree with the licensing jargon the E4200 checks for any new software from the Cisco mother ship.  The setup is super Barney friendly "“ it walks you through each step from plugging in the WAN cable to setting up a passphrase.  Impressive UI.

At this point most users are done configuring the router. But, there is much more for the techy types, such as Connection settings, Parental Control, Guest Access, and general Router Settings.  Too much to go into here.  There are a couple of new widgets in this version of the software, a speed test utility for checking your internet connection, and the ability to turn off the rear LED lights.

Considering all of the talk about router speed and throughput, we like others, were shocked to see that the older E3000 was faster in our tests.  The results below are from PC Mag.

All-in-all I believe the E4200 is the best router on the market today.  Top notch design, clean and easy to use interface, great signal strength, and dual frequency bands.