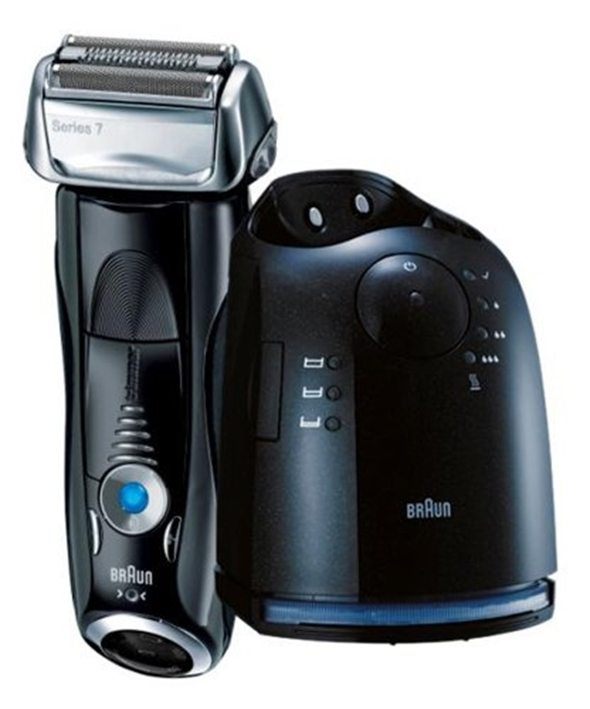 When I was asked to try out an electric shaver and review it, I have to admit I was immediately biased. Thanks to my ancestor's penchant for living in cold climates for thousands of years, I have a thick Viking beard that grows in quickly at all angles.  Not only do I have quick-growing whiskers, I also have an angular face. That double whammy means that I have never found an electric razor that was easy to use, or could shave as close as my good old fashioned blade and shaving gel.  I've tried several different electric razors, but they just never held their own against a blade.

Again, my biased kicked in as soon as I opened the box and read through the instructions for Braun Series 7.  It was like reading stereo instructions to get through all the different features! It's a good thing the razor lived in the bathroom because I had plenty of sit down time to read the instructions patiently over a few visits. (Too much info?) The complexities of the instructions soon made sense when I learned the Braun Series 7 had a docking station that not only charged the razor, but also functioned as a 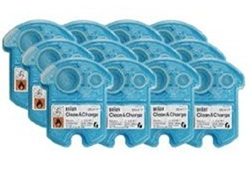 cleaning station. Included with the razor and station was Braun's own cleaning solution that rests inside the dock. Your push-button choices are either a 25 second automatic quick clean or a deep super clean that can go on past 30 minutes. The cleaning feature is awesome because everyone has seen how grubby shavers can get in a hurry.  The razor also holds a 50 minute shave time charge, and comes with a compact travel case, and a quick plug in travel charger.  The case and travel charger come in handy when on the road, that way you don't need to carry the larger base on trips. 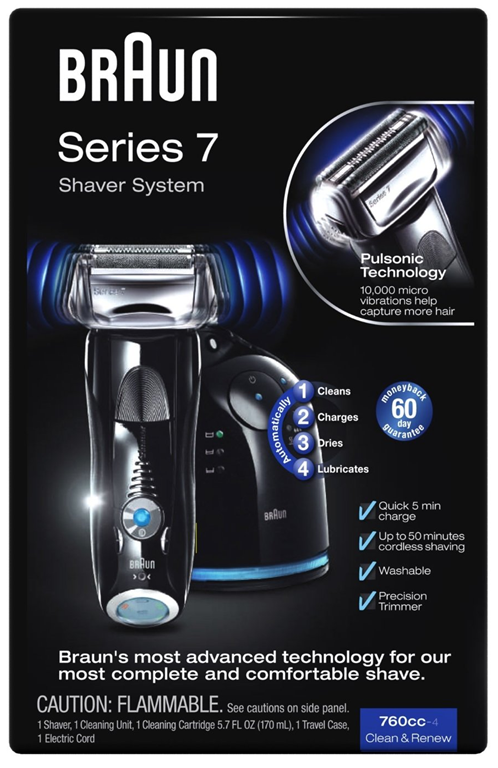 Now for the results of the shave: The first thing I noticed is that the shaver felt good in the hand and was weighted properly.  The Braun Series 7 has a swiveling head that follows the lines of the face and does a good job running the transition from face to under the jaw. If the swiveling head isn't your thing, you can lock it in a fixed position. I still had a to go back and cover that area behind where my man jaw and neck connect in front of the ears. After a few passes in the harder to get to areas, the Braun Series 7 gives a pretty close shave. I also have to mention that it is more convenient and cleaner for shaving when you're in a hurry to get out the door without the five o'clock shadow. The Braun Series 7 Shaver has three modes for an adjustable shave: Extra Sensitive, Normal, and Intensive.  A couple of other tidbits that I like about the Series 7 is that it is made in Germany (sorry China), has a flip-up trimmer, and comes with a two year warranty.

The Braun Series 7 has shown me that an electric razor can really compete, and will be coming with me on the next business trip!  You can find the Braun Series 7 (760cc) Shaver here for about $174.99.