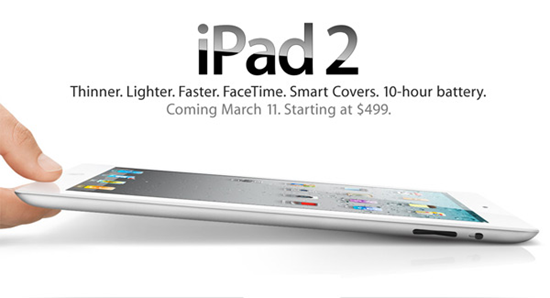 The new iPad 2 is finally official and is improved quite a bit.  Who knew you could improve the iPad?  Every time I think of switching to a competitors tablet it just drives me back to my iPad.  It's the UI stupid.  Any-who, back to the iPad 2.

The iPad 2 has a dual-core A5 CPU that is twice as fast, a front and rear camera, nine times faster graphics performance, and still 10 hours of battery life.  Pricing is the same,

There seems to be a bunch of excitement about a new cover which Steve Jobs defines as: “We designed the case right along side the product. It’s not a case — it’s a cover.”  So basically you get a magnetic flap that protects the front and automatically wakes the iPad 2 when you open it, and puts it to sleep when you close it.  These cool smart covers will set you back from $39 to $69 (plastic to leather).

The iPad2 is 33 percent thinner than the original iPad which is amazing.  You can chose between white and black on either Verizon or AT&T.  Expect the iPad 2 to ship on March 11th with iOS 4.3.