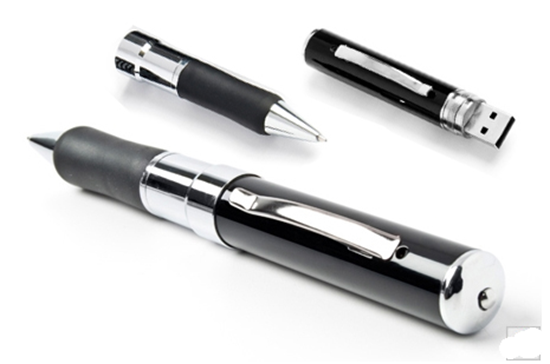 I am a total nerd when it comes to spy gadgets – I dig them, I need them, and I want more of them! You know, the kind of stuff cranked out by that boffin Q from James Bond or Lucius Fox from Batman.  Admittedly, I am a wee bit jaded when it comes to much of the mainstream spy stuff, but once in a while I come across some nuggets that are worthy of notice.  The Spy Pen is one of those examples of functionality and form.  Its a chunky pen with a built in pin hole camera and microphone.  I like the chunkiness of the pen, it feels substantial and well made.  The manufacturer did not skimp on the pen part – it is a superb writing instrument.  The fun part of course is the spy

cam, it is a 352×288 pin hole camera backed by 2GB (You can also get a 4GB and 8GB version) of built-in memory, powered by a rechargeable Lithium battery.  The pen breaks apart into a functional pen and a USB flash drive for easy video retrieval.  The SpyPen is super easy to use – click once for standby, click again to record, and again to go back in standby.  There is a tiny status light that is not noticeable under normal ambient light level that glows yellow on standby and blue for record.  Since the pen-cam is not going to be used in complete darkness this status light will go unnoticed.  This is not a high resolution cam but more than adequate for the job of covert recording, and lets be honest – I am and not James Friggin Cameron and I am not shooting the Avatar with this pen.  That said, the camera works the best when placed in stationary position for discreet recording.  The thing that stands out is the super sensitive microphone, it will give you complete audio coverage in a good size conference room, down to the whispers, people farting, adjusting their underwear and playing footsies under the desk – you will get a lot of audio with the SpyPen.  For the price ($28.99) its a bargain and a great starting piece for any aspiring spy’s collection.