Ever wanted to know what level of radiation you are exposed to in your daily life?  Yeah, oddly enough, me too.  Simply connect your iPhone (or iPod Touch) to the Scosche RDTX-PRO, download the radTEST app, and begin scanning your environment for radiation.

Expect to see the Scosche RDTX-PRO in September for $329.99. 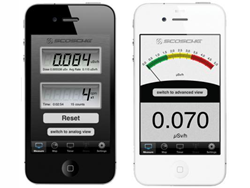 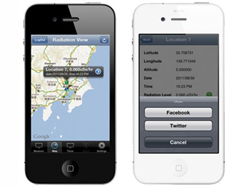 Tokyo, Japan "“ August 31, 2011 "“ Scosche Industries, award-winning innovator of consumer technology, is excited to announce the RDTX-PRO radiation detector and app for iPhone and iPod touch. The radiation detector requires no calibration and allows users to accurately detect gamma radiation above 60keV within +/- 5% accuracy.  The device attaches to an iPhone or iPod touch via the dock connection and is extremely compact for ease of use.  It can also be used as a radiation alarm independently from the iOS device.  When being used as a standalone alarm the RDTX-PRO runs on one AA battery and provides up to 96 hour of radiation detection.
"I was extremely impressed with the accuracy and performance of the RDTX-PRO from Scosche," said Julius James, Radiation Specialist of Fluke Global Calibration Laboratories.  "The detector is as accurate as units that cost significantly more and is much smaller in size."
After connecting the Scosche RDTX-PRO with an iPhone or iPod touch users are prompted to download the free accompanying radTEST app.  The app offers a consumer friendly meter display that shows radiation levels as safe (green), elevated (yellow) or dangerous (red).  For the advanced user the digital display mode can be used to determine exact radiation levels.   Users can also share their results using Facebook, Twitter and Google Maps.

The Scosche RDTX-PRO retail for $329.99 and will be available in September from Synexx in Tokyo Japan.  $10 of each unit sold will be donated to a group of charities with a goal of reaching 1 million dollars within two years.  The charities include the Bikki Children's Fund, Samaritan's Purse, All Hands Volunteers, and others committed to aiding those that were affected by the Tohoku Earthquake and Tsunami.