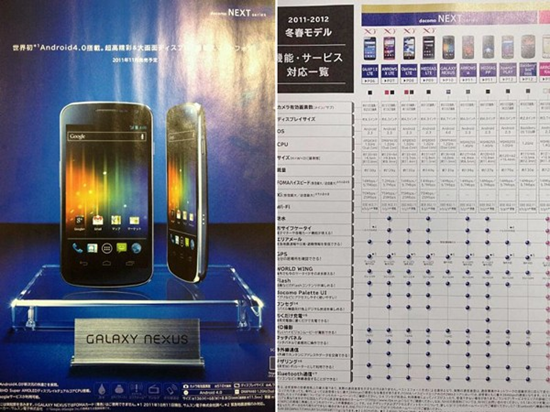 "Either these posters are extremely elaborate fakes, or NTT DoCoMo is really bad at keeping secrets. Just hours after it prematurely tweeted a November release for the Galaxy Nexus (aka the Nexus Prime), we now have what appears to be a full spec list and comparison with the other handsets in the Japanese carrier’s range. The details are nearly all familiar from previous suspected leaks, including the dual-core 1.2GHz Texas Instruments processor, 720p Super AMOLED curved glass display, five megapixel camera with 1080p video recording and 32GB of storage (plus 1GB RAM). Now, it’s entirely possible that the fakers are all singing from the same dodgy hymn sheet — but if that’s true, then they’ve also been busily submitting forged benchmarks to GLBenchmark, which displays results from a ‘Galaxy Nexus’ that include the same 1.2GHz clock speed and HD screen (albeit listed as 1196×720, supposedly due to the onscreen buttons). We’ll know the truth soon enough — the full fandango is but hours away."