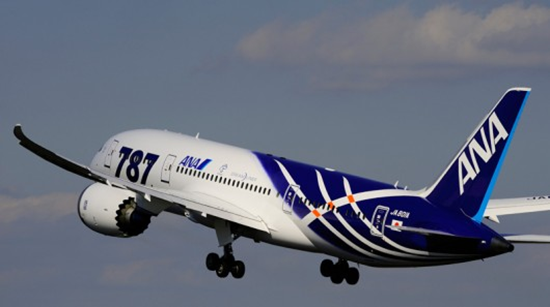 On 10/26/2011 Boeing's launch customer, Nippon Airways, piloted the first ever passenger flight with the 787 Dreamliner.  The Boeing 787 Dreamliner had 240 passengers onboard and flew for four and a half hours from Tokyo to Hong Kong.

"Journalists, special guests and representatives from ANA and Boeing joined Chief Executive and President of ANA, Shinichiro Ito aboard today’s flight. Business Class seats were also sold in a charity auction with one passenger shelling out US$30,000 for a ticket.

The Dreamliner also promises significant fuel savings of around 20 percent, which ANA says will eventually help it save JPY10 billion (US$130m) a year.

The 264 seat plane used for the maiden commercial flight is the first of 55 Dreamliner’s that All Nippon Airways has on order. Two have been delivered so far and ANA says it expects 20 to have landed by the end of FY2012."