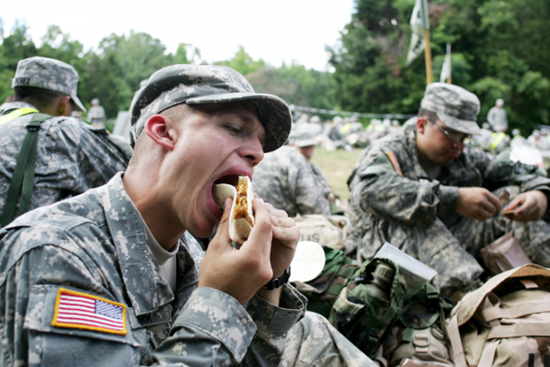 MRE's have a reputation for being a tad gross.  With that said, I have tried some that are good, some that are bad, and some that give me some of the most epic gas.  MRE's aren't meant to be gourmet meals.  MRE's are meant to store for long periods of time, be convenient to pack and cook, and provide energy in the form of a high calorie meal.

Considering that the US has been at war forever so long it is fitting that the Army is working on improving the MRE experience.  The next generation of MRE's is supposedly much tastier.  This is actually a serious problem because soldiers were throwing away infamously yucky MRE meals leaving them with a less than healthy diet.  Some of the new MRE's include caffeinated beef jerky (equal to a cup of coffee), apple cinnamon muffin tops, Asian pepper steak, beef lo-mein, and zapplesauce (an energy enhanced apple sauce.

Want your own caffeinated jerky?  You can get some here.