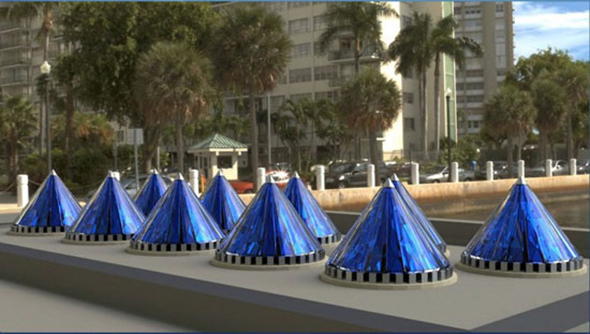 The typical flat solar panels that are in use today have a few major problems.  For example; flat solar panels are less effective when heated by the sun, they don't release electrons efficiently, and unless they are on sun trackers they tend to waste much of the suns time in the sky.  The folks at V3 Solar have come out with a new solar panel that can make up to 20 times more power by spinning the panels and using solar

concentrators.  This advancement by V3Solar is called Spin Cell technology and does a great job at keeping the panels cool while producing more power.

The V3 Spin Cell is currently undergoing refinement through collaboration with industrial design team Nectar Design before it is made commercially available. Once refined, the company believes that the Spin Cell could be a game-changer in its market. On their website V3 explains that if one places a 20x solar concentration on a flat, static solar panel then "the temperature quickly reaches 260 degrees F, the solder melts within ten seconds, and the PV fails. With the same concentration on the Spin Cell, the temperature never exceeds 95 degrees F."

The one meter-diameter cones feature a layer of hundreds of triangular photovoltaic cells positioned at an angle of 56 degrees, encased in a "static hermetically-sealed outer lens concentrator." The photovoltaic cone spins with the assistance of a "small amount" of its own solar-generated power which feeds a Maglev system, intended to reduce the noise generated by the cones as well as any required maintenance.