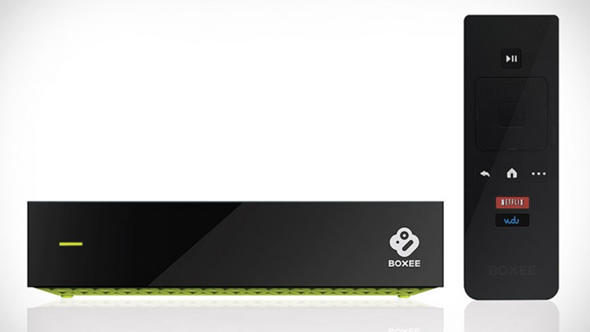 Boxee makes a bold bet, that I believe will pay off, on a DVR with virtually unlimited storage.  How does the new Boxee TV pull that off?  Boxee TV uses their cloud storage to allow it's DVR users store as much TV as they like for $14.99 per month.  The price is

Boxee TV DVR doesn't forget it's roots and still has the internet TV-streaming (Netflix, VUDU, Vimeo, Pandora, YouTube, etc,), but the real focus is the unlimited DVR storage.  One thing you will notice in the picture above is the super minimalist remote control.  Boxee hopes this simplicity will attract more users, especially those that are scared of a complicated remote.  If you want a more complicated remote control you can use your tablet or smartphone as a remote.  They thought of everything!

Boxee TV comes with dual TV tuners for broadcast television.  If you are in an area with good over-the-air TV, Boxee will throw in a digital antenna.  Watch one show while recording another.  The recorded TV is uploaded to Boxee's cloud storage and can then be replayed on other devices like your tablet, smartphone, or laptop.  Expect to see Boxee TV shortly for $99 (plus monthly subscription costs).