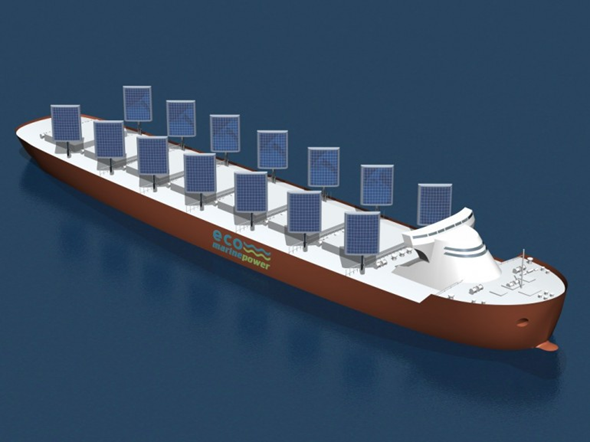 Plenty of world trade happens over the seas via large container ships.  One thing is for certain, large ships burn a bunch of fuel.  Things have remained pretty much unchanged for many years with regards to large ships.  They burn fuel to turn propellers.

A Japanese company, Eco Marine Power, is working on sails that also harness the power of the sun.  This technology, dubbed EnergySails, isn't your typical cloth based sail, it is instead a rigid sail/solar panel.  The wind power helps propel the boat, and the solar panel helps reduce the amount of fuel used for auxiliary generators.

The EnergySail technology really shines when the boats are sitting at port, typically burning fuel.  Instead of using costly fuel to keep the boat operational they can use solar and batteries instead.

EMP estimates that, depending on the number, size, shape and configuration of the EnergySails, a fossil fuel-powered ship's annual fuel consumption could be cut by up to 20 percent, while vessels powered by an electrical propulsion system could cut fuel consumption by around 40 percent. In addition to the fuel consumption and noxious gas emission benefits, EMP says EnergySails could also allow ships to operate more quietly at lower speeds in bays and harbors in comparison to conventional ships.