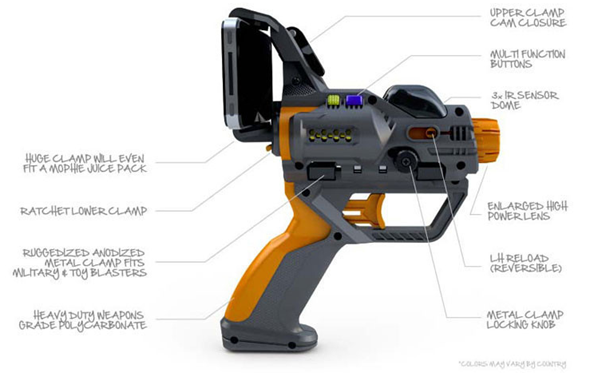 The Hex3 AppTag gaming system has a range of augmented reality games for you to pick from.  Some complicated, some downright simple.  The AppTag Gun works with both iOS and Android gadgets assuming they fit into the upper clamp.

As with any blaster toy, the object is to shoot your friends, but AppTag adds a whole new dimension! The free AppTag Apps keep score via WiFi and players can pick up Augmented Reality Weapons, ammo packs, health Kits, and body armour in a similar way to a console game like Haloâ„¢, but this is real life, inside or outdoors!

You can play single, multi or team games and AppTag can be used with other guns that have an accessory rail, such as Nerfâ„¢, BuzzBeeâ„¢, etc.

Video of the AppTag Laser Tag Gun after the break.