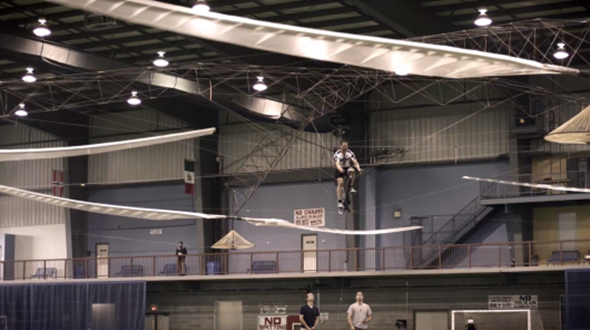 If you aren't familiar with the Sikorsky Prize, it was a challenge for human powered flight set 33 years ago.  When the prize was originally announced it was just $10,000 and was raised to $250,000 in 2009.  To win the prize, a human-powered helicopter has to fly for over 60 seconds at an altitude of over 9.8 feet (3 meters) while staying in a 33 x 33ft (10 x 10m) box.  The smart folks at AeroVelo just took home the prize with their Atlas helicopter.

The AeroVelo Atlas Helicopter flew to 10.8 feet for 64.11 seconds.  Quite an improvement from AeroVelo's previous flight which flew for just 4 seconds and suffered two crashes.  Congratulations AeroVelo!  Video of this human powered helicopter winning the Sikorsky prize after the break.