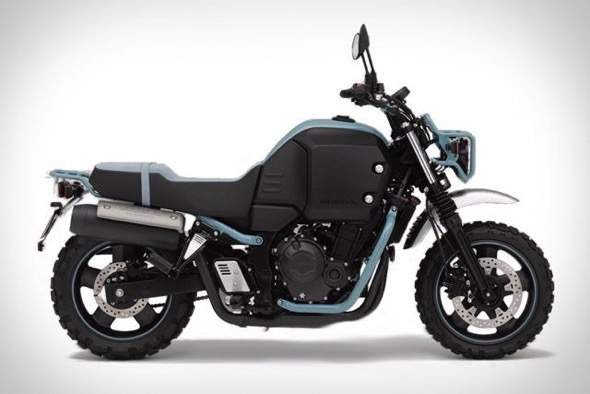 The Honda Bulldog Motorcycle is still in concept phase but fingers are crossed it becomes a reality. The Honda Bulldog wants to be a “Lovable Touring Partner”. Not sure exactly what that means, but it looks like it would be just as comfortable on the highway as on a dirt trail.

The rugged Honda Bulldog has a 400cc liquid-cooled 4-stroke DOHC inline 2-cylinder engine, a six-speed transmission, dual headlights (like the Ruckus), thick 15-inch tires, a low seat, storage compartments on both sides of the fuel tank, and a built-in rack. The color scheme is a subtle black and teal.

If you want to see the Honda Bulldog in person head to this years 42nd Tokyo Motorcycle Show at Tokyo Big Sight.