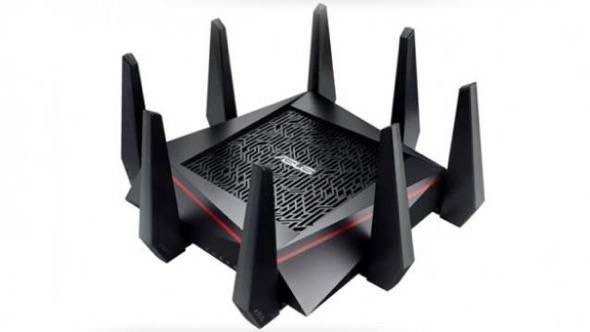 The latest Router to hit the market from Asus is the RT-AC5300. And while it may look like they spent too much time trying to make the router look like a crazy land-mine or DND portal it is actually packed full of modern technology. In fact, the Asus RT-AC5300 claims to be the world’s fastest Wi-Fi router.

The RT-AC5300 ($TBD) is a ti-band wireless router powered by a Broadcom NitroQAM chip and offers up 1000Mbit/s on the 2.4GHz band, 2167Mbit/s on two 5GHz bands. Users can expect some low-latency gaming and ultra-fast HD video streams. The crazy looking 8-antennas are setup in a four-transmit/four-recieve (4T4R) configuration. Range is said to be 500 square meters.