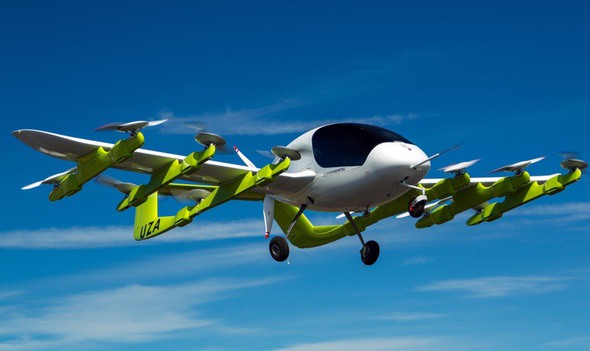 Cora is an airplane that doesn’t need a traditional runway for take-off and landing. With Vertical Take-Off and Landing (VTOL) and an autonomous software the folks at Kitty Hawk hope this aircraft will be the sky taxi of the future. This particular model is named Cora and it can fly at speeds up to 110 miles per hour up to 3,000 feet. Video of this helicopter/plane in action after the break.

Power: All-electric
Capacity: Designed for two passengers.
Altitude: Operates between 500 ft to 3000 ft above the ground.
Wingspan: 36 feet/about 11 meters
Vertical take-off and landing: Cora is powered by 12 independent lift fans, which enable her to take off and land vertically like a helicopter. Therefore, Cora has no need for a runway.
Fixed wing flight: On a single propeller.
Range: Initially about 62 miles / about 100 kilometres.
Speed: About 110 miles per hour / about 180 kilometres per hour.