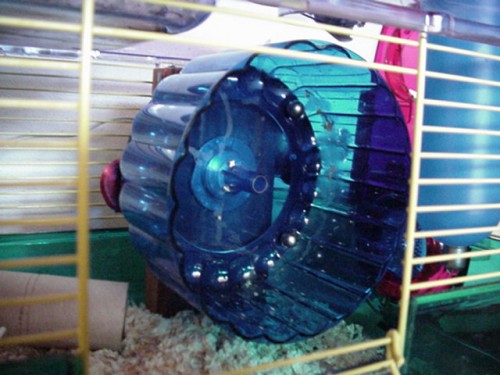 For the super “alternative energy” folks who think solar panels and wind turbines are just too mainstream, there is the hamster powered generator. Your provide the hamster food… the hamster powers the lights.“The first criteria we needed to design the alternator was an estimate of the Revolutions Per Minute (RPM) a rodent can generate on the wheel. The lower the RPMs, the more difficult it is to design a good alternator for it. Analise took a stopwatch to the local pet store and recorded how many times the wheel went around in 10-second intervals, then multiplied these figures by 6 to get RPMs. She found that most rodents can make between 40 and 60 rpm on the exercise wheel. That gave us a starting point for the alternator design.

Our first thought was to use a DC hobby motor to generate the electricity, so we could charge up some NiCad batteries to run a light. However, we immediately ran into the same problems as when we built toy wind turbines using hobby motors — at the required low RPMs, most hobby motors cannot get the voltage high enough to start charging batteries. And you often can’t tell what a hobby motor is rated at, there is not usually a specs plate on it. So you might have a 500 RPM motor, or a 10,000 RPM motor! The rated RPMs of the motor determine at what RPM it can make a certain voltage. None of the DC hobby motors we had available could make even 1.2 volts (the voltage of a single AA NiCad) at 40-60 rpm. So we scrapped the idea of using a DC motor as a generator. Plus, the required diode (to keep the battery from just spinning the motor) would drop the voltage by at least another 0.7 volts. It would be possible, but complicated (and bad practice) to use gearing or a belt and pulley system to raise the RPMs — the friction losses in the gearing system would be major, and design would be complicated. Rodents like to chew, and a rubber belt would be fair game. Plus it’s much more fun to build your own alternator than to use a pre-made hobby motor!” 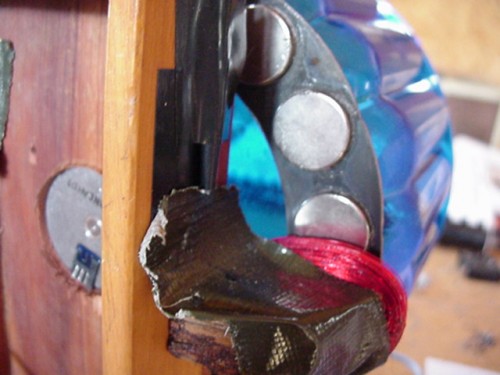