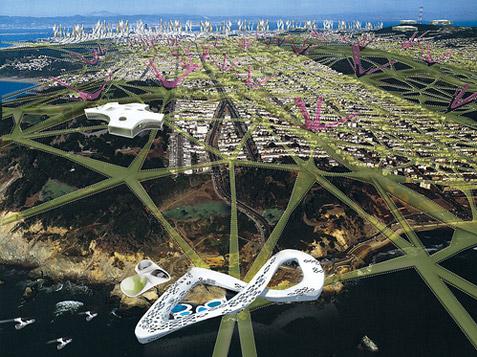 Every so often big organizations like to attract our attention by burning money on meaningless contests with loud titles. The latest intellectual spank-fest is called City of The Future, and is backed by the real heavies like IBM, History Channel, and Infiniti. Competitors were fighting for the $10,000 Grand Prize and City of the Future title. Teams only had one week to envision what their city might look like in 100 years, a mere 3 hours to construct their models, and just 15 minutes to present their vision to a panel of five esteemed judges
– architectural Gong-show… It has been determined that in the future (mere 100 years) we are going to live underground (watch out for Morlocks), or in tubular buildings (totally tubular), everything is going to be ecologically friendly, were going to get around in hovercars (Jetsons?) and things will be done by robots (Jetsons?). Thats right robots! Haven’t you seen Jetsons? Technology is going to be like totally green, dude! Read on for more details.

Who is going to pay for all this megalomanaiacal tripe? I think the big plan is to make ROBOTS (Jetsons?) and have them work for free. Oh my!