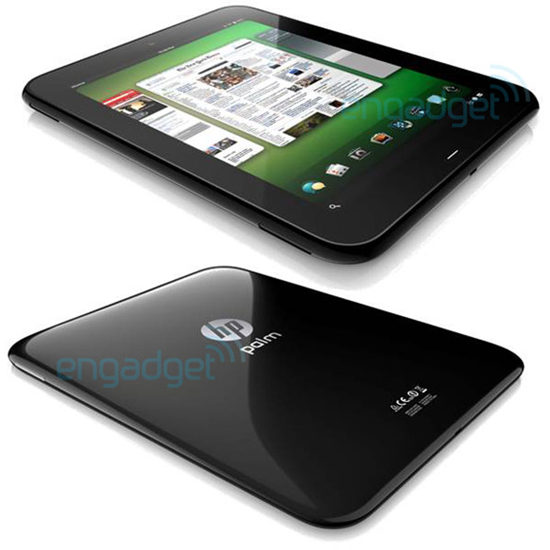 "Oh, hello. A trusted tipster just sent in these internal renders of HP / Palm’s “Topaz” webOS tablet, which is one of two tablets currently being developed in Sunnyvale. That’s right, two tablets: the 9-inch Topaz and a 7-inch model codnamed Opal — a lineup that fits nicely into Palm’s “Something big, Something small, Something beyond” tagline for its upcoming February 9th event. Looking at the render, we’re seeing the no-button design we’d previously heard about (we’re assuming the gesture area rotates with the display), a front-facing camera, a micro USB port on the bottom, and what appears to be a Vizio Tablet-style three speaker arrangement for stereo audio in both landscape and portrait modes — that’s two speakers along the left side and a third on the right. (That’s just a guess, though.) We’d also note the back appears to be a glossy material, which might rule out a giant Touchstone for charging — Touchstone backs have heretofore been soft-touch, but anything can change, we suppose.
We’re told that units will start to arrive at Palm HQ in June as production ramps up for launch later this year — a timeline backed up by an internal marketing slide we received that lists WiFi-only, AT&T 3G, and Verizon LTE versions of the Opal arriving in September 2011, and on AT&T LTE in July 2012. The slide also indicates the Opal will have a particular e-reading focus, which makes sense for a 7-inch device, and there’s a mention of “premium audio,” which nicely reinforces our speaker hypothesis. Unfortunately, we don’t have any word on specs or pricing yet, but these things had better be packing some serious heat for cheap if Palm is really planning to wait until September to launch them — they’ll be going head-to-head with the Xoom, the PlayBook, and presumably the iPad 2. We’re still digging for more, so keep an eye out — things are going to get crazy leading up to February 9th."