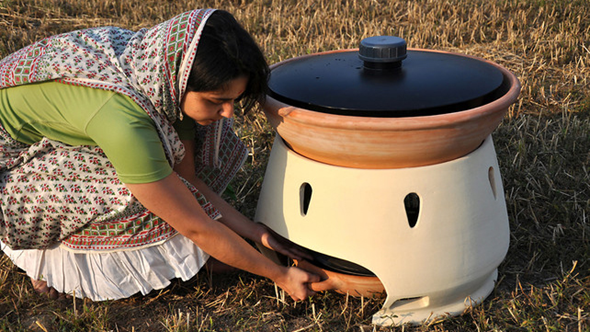 Designer Gabriele Diamanti has created a solar oven called the Eliodomestico that can make salt water drinkable. Furthermore, the invention can be made out of cheap and readily available materials enabling local craftsmen in the developing world to build the oven for themselves.

The system works by using a black boiler on top which heats up from the sun and forces steam downward through a pipe.  The steam/water is then collected in a lower chamber as clean drinking water.  Essentially it is an open-source solar powered desalination oven.

"This project is intended to bring good drinking water to the families in the developing countries at no operating cost, starting from sea water," Diamanti says. "It works like an upside down coffee maker: during the day, the heat of the sun raises up the steam pressure into the black watertight boiler. The steam is forced down through the expansion nozzle, thus condensing against the lid."