Yep, it was only a matter of time before the local food delivery guy on the scooter was replaced by a UAV remote control airplane??  The Burrito Bomber is just that, an unmanned autopiloted remote control airplane that can carry a 3-inch diameter 500 gram burrito.  The burrito is then dropped on the exact location and delivered by parachute.  More information and video of the Burrito Bomber after the break.

Using a Skywalker X-8 FPV/UAV Flying Wing for a frame, the group constructed a delivery mechanism out of a Quantum RTR Bomb System with a canister built from a 3-inch diameter mailing tube and some custom 3D printed parts. Navigation is handled by an ArduPilot control system, which the developers can use to set waypoints for the drone to follow on autopilot or manually control the aircraft using the video feed from a built-in camera.

Orders are taken through a web app, which pinpoints a user’s location and automatically creates a waypoint file for the drone to follow. Then an operator loads the burrito into the canister, uploads the waypoint file, and sends the bomber on its way. 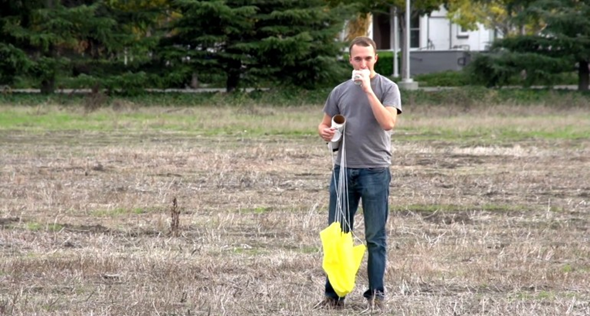