Akrapovic, a Slovenian Company, is well known for making exhaust systems for cars and motorcycles has created one hell of a concept motorcycle. The Akrapovic Full Moon Concept Motorcycle is wrapped around a 1,524cc S&S Knucklehead engine. The 30-inch front wheel is a blend of aluminum and carbon and is the reason for the Full Moon name. The huge rear end isn’t hiding the exhaust, it is the exhaust. That teardrop sheet metal is an integral part of the exhaust system.

Some cool features, aside from the amazing design, are the LED taillights, LED lighting on the front of the footrests, and a hydraulic suspension system that allows the bike to lower and park upright. Read on for the Akrapovic Full Moon Motorcycle press release, and more pictures, after the break. 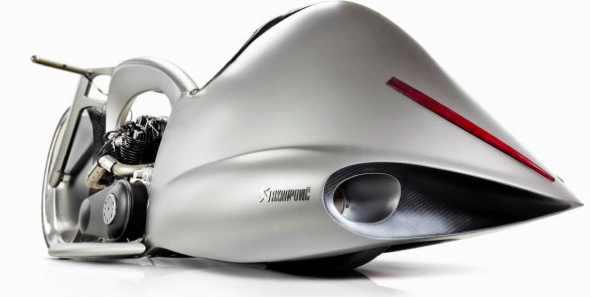 This stunning new concept has been developed with the assistance of Slovenian Dreamachine Motorcycles-the same partnership that produced the legendary Morsus in 2011. Like its predecessor, the Full Moon is an extravagant, technically exceptional, promotional bike from AkrapoviÄ.

Designed to be a continuation of the Morsus story, the Full Moon has a personality and characteristics completely different from its predecessor and has been designed to excite anyone that might not have been impressed by AkrapoviÄ’s first prototype machine-if that were at all possible!

This concept machine was developed to avoid being categorized, and as such is a bike that belongs nowhere and everywhere, making it a unique motorcycle. The name comes from the huge aluminum and carbon thirty-inch front wheel, which is completely visible, giving the impression of a full moon and making a huge statement of what this bike is about. Over eight hundred hours went into creating this superbly finished machine, which features an S&S Knucklehead 1,524 cc engine and two modified custom-made AkrapoviÄ exhausts. The frame and bodywork are made entirely of sheet metal and form an extension to the exhausts. The bodywork is thus part of the AkrapoviÄ exhaust system-an integral part, in fact-and the bike itself is essentially an exhaust. 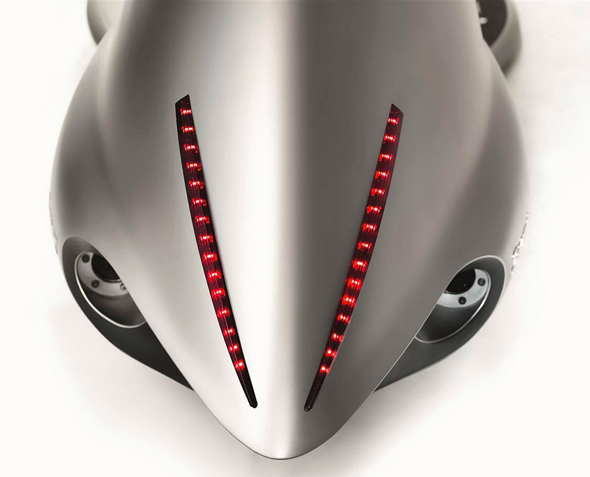 The thirty-inch composite wheel is not found on other custom bikes, and another innovation is a composite braking disc, also unseen in this size on motorcycles until now. The steering is completely automated, which allows a minimalist steering rod without any visible cables that would otherwise be required for the bike to function. The Full Moon can also stand upright when parked, courtesy of its hydraulic suspension. This is an extremely technically advanced motorcycle, full of unique elements that were carefully chosen to make the bike totally exclusive, and the shape hides completely new solutions used on a custom bike for the first time. The Full Moon is like no other bike out there now, and AkrapoviÄ is very proud of it.

The Full Moon is now the star attraction at the AkrapoviÄ booth-which also features all the latest state-of-the-art AkrapoviÄ custom bike exhausts-at Bad Salzuflen, where it will remain until the end of the show, before heading off to be showcased at many other events, exhibitions, and fairs.