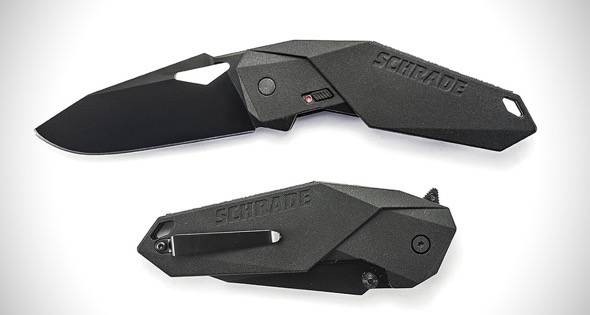 The Schrade SCHA5B Magic Assisted Folding Knife ($44) is a cool looking knife. It looks somewhere between a stealth fighter jet or something an alien would carry in a sci-fi movie.

The Schrade SCHA5B comes with an assisted opening system that you can open with the thumb knob or the flipper. The blade is AUS-8 steel (average 58 HRC hardness), the handle is aluminum and has a textured strip along the backbone, and it weighs just 5-ounces. While the knife is ambidextrous the pocket clip is only on one side and can’t be relocated. There is also a lanyard hole at the end of the handle and a safety switch which can be used to lock the knife blade int the open or closed position.