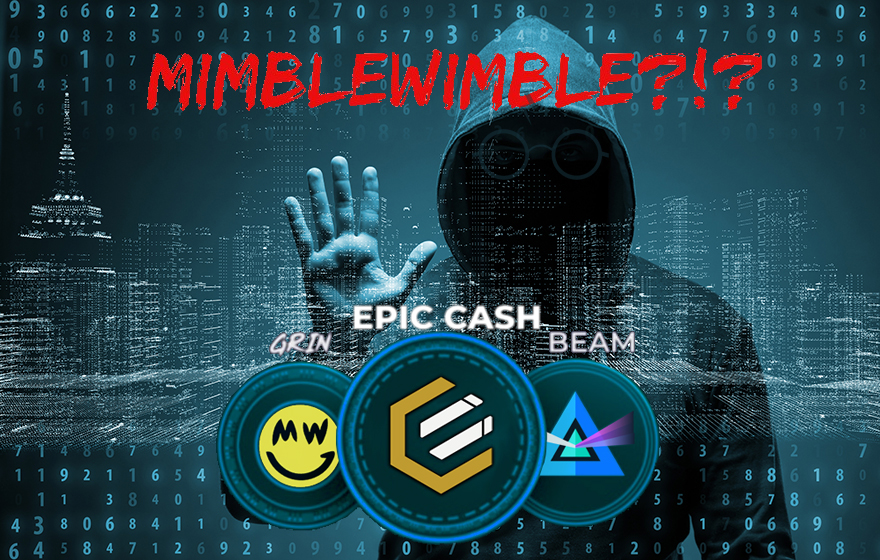 In the hyper-competitive world of today’s cryptocurrency, Mimblewimble is perhaps the most worthy and evolved contestant. Mimblewimble offers enhanced anonymity and privacy without addresses while offering high speeds, a much lighter blockchain than Monero and Bitcoin, fungibility, and scalability. Utilizing a proof-of-work emission model, Mimblewimble offers the ability to mine the coins just like Bitcoin and Monero do. In terms of privacy evolution, having learned from the mistakes and shortcomings of predecessors, Mimblewimble takes anonymity and privacy very seriously. As the awareness of the technology increases, I believe that Mimblewimble will be the new go-to technology not only for privacy-oriented users but for everyone who does not want unnecessary overexposure of their financial data. In Mimblewimble, it’s impossible to track and trace the movement of individual coins.

In the Mimblewimble arena, several projects have emerged and enough time has passed to see where they stand on their merits. For now, I would like to compare three Mimblewimble coins – Beam, Epic Cash, and Grin. The reason for these three is simple – Beam and Grin are the earliest adopters and Epic Cash is the more recent and somewhat more evolved one in terms of ability to be mined with CPU, GPU, and ASIC.

First, let’s talk about the basics – how things got started and who is running these projects.

Grin has been around for several years, actively since 2016, and became mineable in January 2019. It’s a community- and volunteer-driven project with occasional donations and pseudo-anonymous leadership with a cool crypto anarchy vibe and slightly elitist newb-hostile bent with the CLI>GUI Linux uberness.

Beam is quite the opposite in its roots, it’s an Israeli startup that hit the scene around March 2018, that became mineable in January of 2019 as well. This is somewhat ironic and may raise some eyebrows considering that Israel is not exactly known as a privacy-minded country (especially of late). After raising $5M in venture capital funds, Beam is very much a for-profit-company with a team of paid developers, marketing people, and other support staff. Considering funding vs payroll Beam has a relatively short time to become profitable or else.

Epic Cash started similarly to Grin as a community- and volunteer-driven project, also with pseudo-anonymous leadership, in 2018 but with a more practical angle trying to address the perceived shortcomings in the Grin and Beam projects. Epic Cash launched and became mineable in September of 2019. 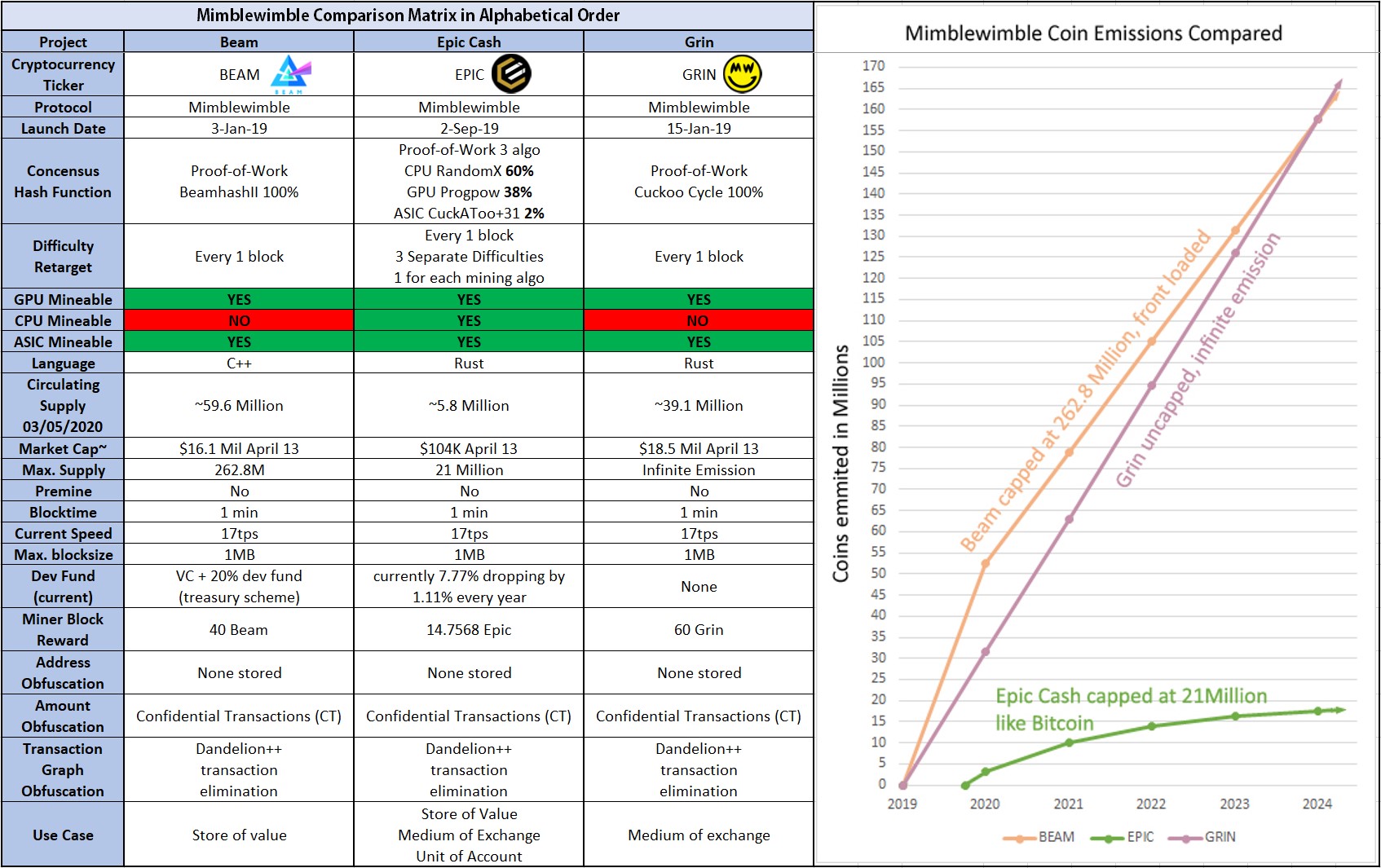 When we look at these cryptos, can we definitively say that one is better than the other? As someone once said, “Everything is a shitcoin until it’s not”. Today Bitcoin is firmly in the first place, and that’s despite its shortcomings. Monero climbed thanks to being private, anonymous and fungible and keeps holding its value, despite having a heavier blockchain due to the privacy measures. Lately, however, Mimblewimble is the one turning heads by taking fungibility and privacy to the next level.

Looking at the economic basics of these coins there are some very obvious differences in their goals and approach:

Grin is an endless fountain of emission and inflation. It has no cap and no emission-reducing halvings, delivering a steady and endless supply of coins forever, making their individual value over time questionable. Technology-centric, with no dev tax and a great team of programmer volunteers, Grin continues to push the envelope forward on making Mimblewimble more formidable. Grin keeps adding cool techie improvements to its lineup and certainly has many talented people in its ecosphere.

Beam, on the other hand, set a limit, if you can call it that, of 262.8 million coins over 133 years, which sounds good until you take a close look. They continuously disparage Grin’s infinite emission as irresponsible. Keeping in mind that Beam is a for-profit company and for-profit companies do not get funded by setting 100+ year goals, and taking a closer look at Beam’s emission schedule, we notice that Beam front-loaded their emissions so much so that for the first year they pumped out more coins than Grin! Beam’s Treasury Tax for the first 5 years is set at an aggressive 20%! Beam appears to be focused on doing community-oriented improvements.

Epic Cash adheres to the Bitcoin model, catching up and eventually matching Bitcoin’s curve of capping at 21 million, making it the least inflationary coin of the three. The dev tax was set at 8.88% in 2019, became 7.77% in January of 2020, and will be reduced every year by 1.11% until it hits zero. Epic Cash dev team is focused on improving the user experience and ease of use, as well as offering equal usability across Windows, macOS, Linux and eventually iOS and Android platforms.

Epic Cash has one more ace up its sleeve, well more than one actually. Epic Cash is the only Mimblewimble crypto that is mineable with CPU, GPU, and even ASIC, whereas Grin and Beam are GPU only. Currently 60% of Epic Cash blocks are mined with CPU-centric RandomX algo (used by Monero and few others), 38% mined with a GPU-Centric ProgPow algo (one that created a lot of controversy in the Ethereum community), and 2% with the CuckAToo ASIC friendly algo. Best future-proofing news is that these algorithms and their percentage of the mining total can be trivially hot-swapped without compromising the integrity of the chain. This allows Epic Cash to be adopted by a wider base of users including gamers which represent a huge percentage of the tech-savvy online community.

Considering how extremely inexpensive these three Mimblewimble coins are, they appear to be a solid investment choice as we are seeing the cryptocurrency market beginning to rebound with privacy and anonymity becoming an increasingly valuable selling point. From a strictly investing point of view, I favor Epic Cash. Considering how cheap it is today, I believe, it is more likely to go 100x than its more expensive neighbors. Time will tell.