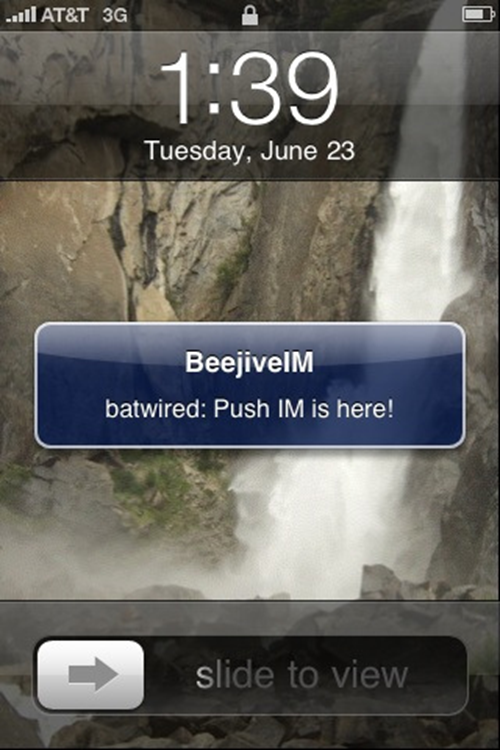 Internet-addicted iPhone addicts, rejoice: Push instant messaging is here. That means you can constantly stay connected to your IM services (e.g., AOL Instant Messenger and Gchat) on your iPhone even when it’s asleep; you can receive IMs similar to the way text messages work.

BeeJive is one of the first IM clients to take advantage of push. I’ve tested the app for about seven hours, and

I’m pleased to report push IM works quite nicely. On my iPhone 3GS, push IMs appeared almost immediately on my screen, even when I was using other apps. The IMs appear in a small rectangular box, giving you the option to close the message or view it in the BeeJive app.

During testing there were occasions where push IMing simply wasn’t working. However, some users are also reporting similar problems with the AOL Instant Messenger IM app, which is also supporting push. Kai Yu, developer of BeeJive, assures me this is likely a problem related to Apple’s push-notification server — new technology, so hopefully Apple will improve it over time.

“Apple push is not a guaranteed delivery, so a failure to deliver to the phone does not necessarily mean it’s going to queue up the messages and try again,” Yu said. “This may change down the road but right now it’s a best effort attempt.”

Yu added that push IM is performing better on iPhone 3GS compared with the earlier models, the iPhone 3G and original iPhone. He believes this is because the 3GS is more efficient with radio and memory usage.

Overall, after testing various IM apps (AIM, Fring and Palringo), BeeJive is by far my favorite. The interface is slick and beautiful. Flipping the iPhone sideways displays IMs, as well as the keyboard, in landscape mode for easier typing. The app supports eight IM services including AIM, Google Talk, Facebook IM and ICQ.

BeeJive is available for a sale price of $10 for a limited time through the App Store. For a video tutorial on setting up push, visit BeeJive’s web site.