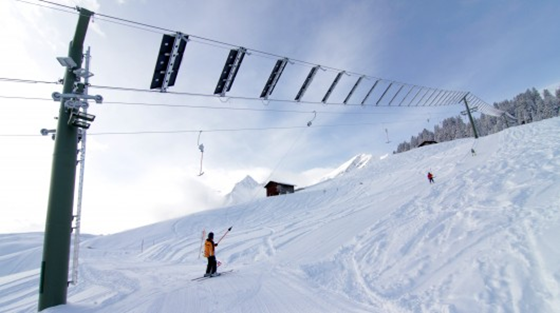 The tiny Swiss town of Tenna has put itself on the eco-map by building an innovative solar-powered ski lift. The solar lift is one of the world’s first of its kind, and utilizes a “cable car system” where the solar panels are integrated directly into the lift. Approximately 80 solar panels are incorporated into a 450-meter (492-yard) system that is suspended above the ski lift, which has the capacity to pull 800 skiers up the mountain per hour. To avoid running out of energy during bad weather and snow storms, the ski lift is also connected to the local power supply, so skiers will not be left hanging on in the dark!

The solar ski lift captures as much energy as possible by utilizing swiveling solar panels that follow the sun’s rays, and automatically tilt to shake off snowfall that may be covering the cells. On a sunny day, the solar panels produce approximately two times as much electricity than what is required to operate the lift, with the excess energy going to the public grid. The lift is expected to produce 90,000 kilowatt hours of energy annually, and will make a considerable contribution to the local community’s power grid during the off season.

“When the ski lift is switched off in spring it turns into a solar power plant,” explains Edi Schaufelberger, president of the ski lift cooperative in a Swiss Info video interview. “It doesn’t harm the landscape since the lift and pillars stay in place anyway. All the electricity is sold into the grid and is sold as solar electricity.” ,