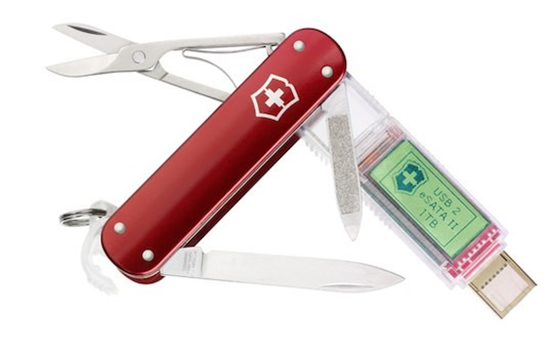 Before I profess my love for the Victorinox SSD Swiss Army Knife, I have a long term relationship with my Swiss Army Signature Lite.  I love my Signature Lite Pocket Knife because it is very small and lives on my keychain.  It also packs some super useful items in it's tiny form factor "“ a knife, nail file, flat head screwdriver, LED light, scissors, and a pen.  The pen alone has paid for itself.

OK, on to the Swiss Army SSD knife.  As the saying goes, the best knife is the one you have on you.  In other words, a knife will do you no good sitting in a drawer at home.  The same goes for your data.  A 1TB hard drive does you no good sitting at home when you want to share a file with a friend in the office.

Victorinox has answered the call with their SSD knife which is the first to offer a single connector that works with eSATA II / III and USB 2.0 / 3.0.  Another cool feature is that green tinted part of the SSD drive is actually a Bi-Stable monochrome graphic display for showing you what you have stored, etc,  Moving data around is fast (220 MB/s read and 150 MB/s write) and secure (hardware- and software-based 256-bit AES encryption).  No mention of pricing or availability, but I am waiting with wallet in hand.