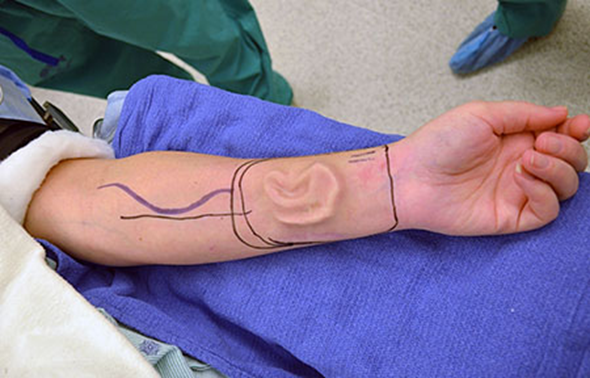 Medical advancements are amazing, in this case, Sherrie Walters had her left ear removed due to basal cell cancer.  The sorta good news is that Dr. Patrick Byrne created a new ear for her that he grew on her left forearm.  More details and video after the break.

The bizarre procedure was led by Johns Hopkins surgeon Dr. Patrick Byrne. It was performed on Sherrie Walters, who had previously lost her left ear – as well as part of her skull – in a previous operation to help her fight her basal cell cancer. Dr. Byrne “used cartilage from Walters’ ribs to stitch together a new ear matching her right ear.” The cartilage was then implanted in Walters’ left forearm, where it grew for “months”, no doubt the weirdest months of her life.