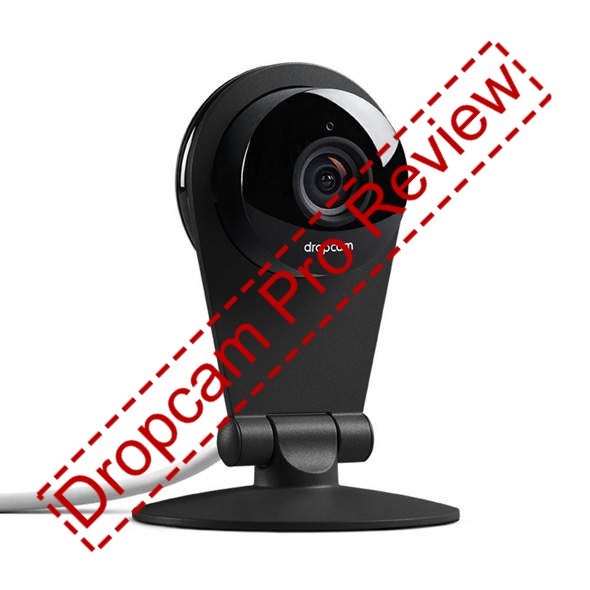 There are so many home monitoring camera options available today, each with their own plusses and minuses. My hope is that the DropCam Pro ($199) could be my goto camera system for the home and small office. Read on for the DropCam Pro review to see if it hits the mark.

My first impressions of the packaging and manual was very good. The packaging is not oversized and inside you will find your Dropcam Pro, an aluminum stand, a 10-foot USB cable, a USB power adapter, and some mounting hardware. Dropcam is now owned by Nest which is owned by Google. For me that is a good and bad thing. Not to go all conspiracy theory here, but I think Google has strayed from their original company motto of “don’t be evil” a bit. In other words how do you feel about Google having a live camera and microphone in your house that ONLY stores on their servers? Obviously I am not too worried about it as I bought one of these cameras. Enough of that.

The camera is easy to setup and comes with a small and simple quick start guide. The Dropcam Pro setup does require an internet connected computer however. Once you are connected to your wireless network and have created an account you can immediately start viewing and recording video and audio. There is an initial free trial period for the Dropcam CVR (cloud video recording), after than things get pricey. Currently their are two recording options:

This, and the video quality, is where the Dropcam Pro really shines. The software is very intuitive and easy to use whether on an iOS, Android, or any computer with a web browser. When using the mobile app you can use a two finger pinch/spread for digital zooming in and out. Typically zooming in digitally isn’t that pretty and quickly shows a blur pixelated image. This isn’t the case with the Dropcam Pro as the video quality is high-def and has a good image sensor. There is also a magic want icon which will sharpen the area of interest. This works quite well as long as there is plenty of light.

The audio portion of the camera is pretty good. The microphone picks up audio better than the original Dropcam. There is a two-way audio feature where you can listen and send audio back to the camera. Great for letting your kids you know you are always watching. (Enter villainous laugh here) I could only test the talk feature via a computer browser as it currently doesn’t work with iOS version 8.1.3 (the latest version). This is a bummer as I am often relegated to using my iPhone as my mobile computer when running around. 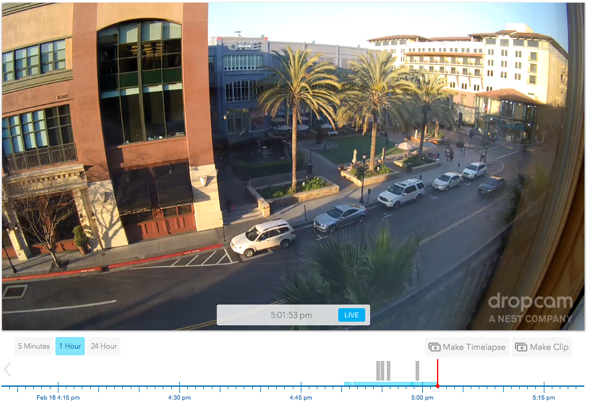 Finding recorded video clips is very easy to use and works superbly. You can pick the days/hours of interest and see where there was a motion event. The motion events are marked with vertical grey bars, simply click on watch/hear the event. Currently they have the best logic available with this feature as the cursor snaps to the area of interest and plays about 2 seconds of video/audio before the event. If you hover the cursor over a block of events it loads small preview windows. Very handy for reviewing tons of footage. 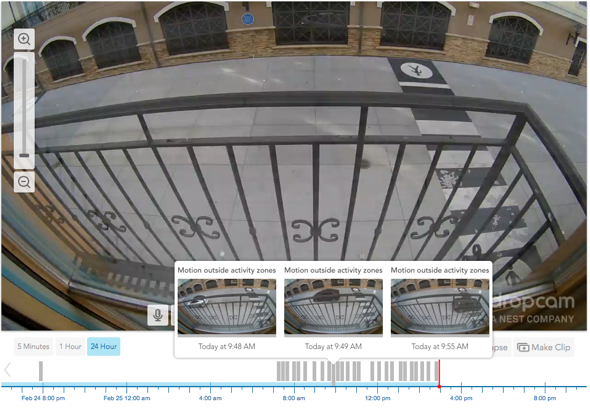 Notifications work as expected but with a decent delay. You can have alerts scheduled for specific times or when you are home/away (via location tracking on your iOS device). The location based feature is nice if you don’t want to receive tons of alerts when you are at home walking around in front of your camera.

The optics on the Dropcam Pro are pretty darn good. Take a look at this cool live camera by the beach.  The camera does a better than average job in low light conditions even though it has only eight infrared LEDs. During the day the separation between light and dark areas is very good. For example, it does a good job showing video in shadowed areas. With other cameras we have tested the shadows look like everything in them is painted black. 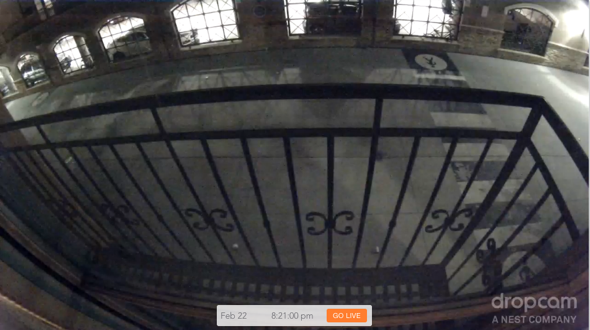 My two main gripes with the camera are related to nighttime viewing/recording. During low light conditions, if there are any bright lights they tend to wash out that area of view (see image below). Also, the camera is useless for nighttime recording if you have it pointed out a window, say at your front door. This is a big deal for me as that is how I have to use the camera since they don’t make an outdoor/waterproof version. The glass windows seems to be a barrier for motion detection once the infrared LEDs come on. 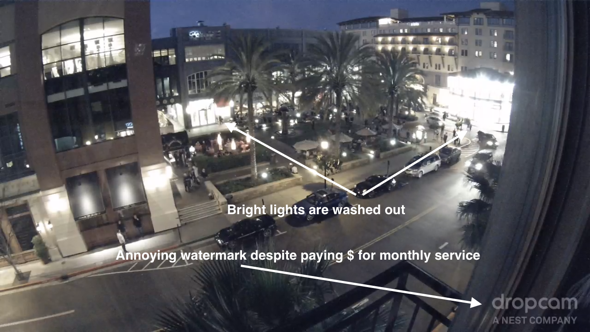 Cons – DropCam Pro talk feature doesn’t work with iOS version 8.1.3. The motion detection misses large events, often for hours at a time, mostly in at night time. Regardless of bandwidth the camera has connection issues from time-to-time. Monthly and yearly cloud storage is expensive, and is your only option. Indoor only. Tacky watermark (“dropcam A NEST COMPANY”) on lower right corner of your videos.

I occasionally ran into “slow upload speed…” errors despite having plenty of bandwidth (see images below). 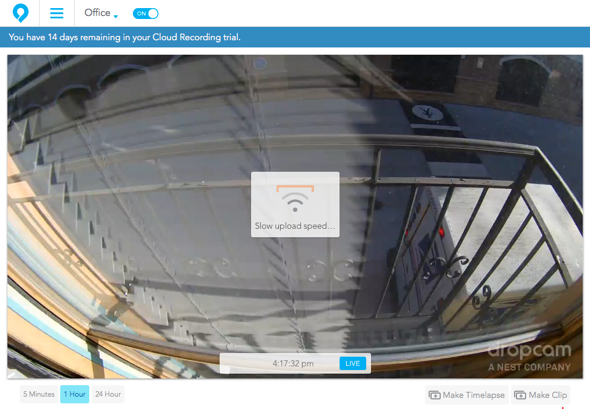 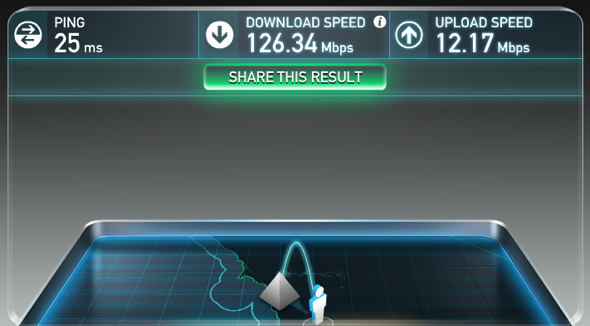